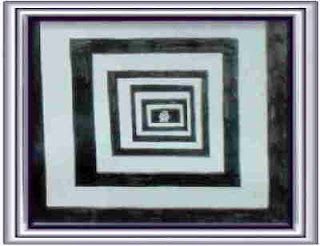 
Have you ever had something happen and you're left feeling completely overwhelmed and confused, not just about the 'Happening', but the effect it has on someone's feelings towards you?

I guess it doesn't have to necessarily be one particular set of circumstances, but could cover a range of different scenarios when, for no apparent reason everything suddenly turns your world upside down, inside out and ... you're left dangling, wondering what the hell just took place.

Now I'm not even going to describe the experience as it happened to me because, well, to be honest, I still don't understand it myself much less am I able to describe it coherently to someone else. All I know is that it started out as a good day. Positive things were happening. That's what made it all so much worse. It was evening. Sitting down relaxing.

Then it came. No warning. Leaving behind after-quakes and tremors as if a very violent storm had happened, or the unexpected eruption of a volcano which had lain dormant for any number of years.

From out of nowhere it happened and changed my world forever.

I don't even know the trigger, what caused it ... words are locked in a place somewhere deep in my mind, and there's no key to unlock the mystery behind what followed.

I know I went to bed, turning my back on an otherwise perfect day which, as if the sun was suddenly hiding behind the darkest black cloud; flipped into some other worldly shape I didn't understand. But next morning, there it is, a total eclipse ... my world as I knew it lost forever.

Is this making any sense?

Does anyone share the experience of this happening in their life, no matter what the circumstances?

People you knew and trust, even love, now turn their backs, treating you like a pariah. Why? Words are spoken, yet make no sense, because you have no answers. You can't explain what happened, even to yourself, because you just don't know. You were there, yes, but otherwise, truths are hidden from you. It can happen that way. Your mind blocks out happenings to protect you. It's how we survive trauma. Besides, everyone has their own perspective. Like being interviewed after something awful has taken place, every witness will say something different, depending on their viewpoint, where they were standing at the time. What they saw and heard can differ radically from another. What they saw and did is not the same as you saw and felt happen, that's for sure. They believe what they think they saw, arriving at their own conclusions based on what they believe, what they have experienced, and the way they live their lives. That's all that matters, it seems, and is enough for them to make a judgement call.

It can happen when people quarrel or row. When people don't listen with their hearts, and show compassion just when it's needed most as the other person gets more and more distressed. But in this instance, there was no argument as far as I'm aware. I don't remember. That's all I can say. And that's the truth. Yet to the other person, suddenly, it's appearing more and more as if I'm wriggling out of my responsibility somehow just by saying that, even though I do recall begging them to stop and respect my wishes before it went too far. Words clogging the brain, coming at me, going round and round in a whirlpool of confusion and self-doubt. How could I NOT know or remember?!?

However, it's the repercussions of this event which are most disturbing. The person walks away, and you don't hear from them for a long time ... a VERY long time. Which is worrying, given they used to be in contact almost every day and you thought you were close. This was the least likely person for this to happen with. Which begs the question: what did I do that was so wrong? If I did this dreadful deed, why don't I remember? I feel guilty as hell ... as well as disgustingly sick, depressed, ill, my self-esteem blown apart, my confidence shattered ... too many emotions to be labelled by words. I try to write my thoughts and send them out into the ether. Nothing comes back. So ... what's to be done? Nothing, I guess. But the situation only grows worse ... growing out of all proportion, even though I'm doing nothing at all. Nobody is talking about it much less sharing ... at least to me. Now it's far too painful, the repercussions of this event too far-reaching for me to even want to try to talk about it, or discuss what happened. I'm the one this happened to. I'm the victim here ... I think. Or is something else more sinister going on beneath the surface, something I'm not even aware? A misunderstanding perhaps?

Meanwhile, days ... weeks ... months pass. My world is hurtling off course. It affects every waking, every dreaming moment. Nightmares return from childhood. I can't breathe. Panic attacks take over. It's having a psychological effect. And all because of these few moments in time ... moments which remain unknown, like some unseen hand has covered the scene with darkness, drawing a veil around truths which can neither be seen or heard. 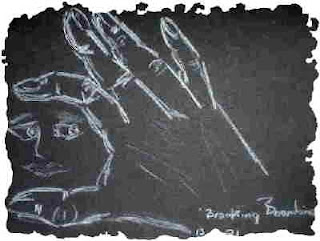 Posted by Janine Harrington at 04:05
Email ThisBlogThis!Share to TwitterShare to FacebookShare to Pinterest