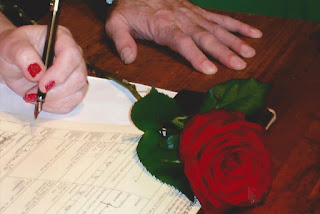 Today is my Wedding Anniversary, married on 20 September 2013 to Tony.

I trusted him, I believed in him, in the promises we made to one another that day, the words of a poem I wrote for the occasion falling from my lips so easily, and in the future waiting beyond the doors of Gretna Green Chapel, surrounded by my two sisters, my younger sister's two amazing sons and my daughter Jo with her now-husband Hrach. It was truly a wonderful occasion ... one of the happiest days of my life. I have relived it in my mind a thousand times during the intervening years, with our honeymoon spent in La Rochelle, France. At the time it was surreal. A fairy tale in the making. Cinders truly DID go to the ball! The frog really DID become a Prince. We had been together a few years, but on this day it was the celebration of a Promise - two halves coming together, sealed forever as One, proving that happy-ever-afters really can happen.

So if the future was all so rosy and bright ... why then today am I alone?

The last time Tony and I were truly together was my birthday, 4 July this year. Yet, even then, it wasn't the same. I kept asking, as in weeks previous: is something going on, something I don't know? Always, the response was that it was me being paranoid, all in my imagination! So why did it feel as if my card this year was but a token? Suddenly, time became frenetic. On this one day shared before his long drive back to London where he was working, he was consumed by the task of erecting a swing-seat in the garden. Couldn't this wait until next weekend? But then ... I didn't know he was actually preparing to leave both his marriage and home! What happened to our special meal where we dress up for the occasion? True, we later shared tea and cakes. But all my instincts were kicking in, screaming at me that something was off, and it wasn't me!

Two weeks later I received the email from London saying he was never coming home. The story as it unfolded is recorded in previous postings. He knew when I met him that this was my breaking point ... yet he did it anyway. Meanwhile, the betrayal just gets worse as I discover this man to whom I gave everything that is in me to give, loving him with all my heart; has in truth been having an affair with a lady from Italy in London since March this year at least.

To me now, my darling husband Tony is but a stranger. What the real truth is, I have no idea!

There are always consequences, as anyone reading this will know. Those who have shared this experience themselves will understand. It is a death ... the death of past because everything we had and shared is tainted by deceit and betrayal ... death of the present as I have no idea what is truth and what is lies, and the essence of truth, trust and love, things which are most precious, have been torn from me  ... death of all our hopes and dreams for the future. Grief is a terrible thing to live with. It has no beginning and no end. But when compounded with betrayal and untruths, when you discover unexpectedly that the man you thought you knew is actually a stranger; the world as you know it falls apart. Even the happiest of times spent become smudged with regret, tainted with bitterness, lies. My heart is broken. I can never be the same woman again because of the devastation caused by this one man.

The band of gold on my finger has become my 'Suffer Ring'. I have nothing to believe in any more.

Many tens of years ago, in another life, having endured the worst beating by my then violent first husband; I made a contract with myself - every negative has to be eclipsed with a positive, the more of a negative it is, the more the positive must be.

I AM a survivor.

Through past experiences I gained a PhD in Life!!

It means that today, even though I exist moment by agonising moment, already I have threads of pure gold reaching out to me through the darkness, creating a positive pathway of stars that shine bright.

Yesterday, I went on a long walk through the village, down to the coast, along the prom and up through the woods into the Gardens, working my way painfully inch by inch back along the path leading home. Over ten years ago, I arrived on this beautiful coastline on the east of England in a wheelchair. I never believed I would ever actually get to see the rolling waves eating away at the sand. Yet gradually, taking small steps, I have reached this point. I can't move today, because my body is a mass of pain. The walk was too much. But the important thing is I DID IT! It became for me my POSITIVE ACTION for just this weekend.

Today, somehow for me, one positive wasn't enough. I needed a mass positive to eclipse the mass negative of not being able to share and to celebrate our Wedding Anniversary together, knowing he is with someone else. To this end, after many many months of research and writing, I have completed the second in a series of three books about RAF No. 100 Group, focusing on their 1944 operations. (The first book in the series is in my last Post.)

Question: Why does a Mistress get better treatment than a wife?

In my ponderings, reaching for inspiration, I came across these beautiful sentiments in a poem. It offers hope:

A Stone, A Leaf, A Door
by Thomas Wolfe