A REMINDER THAT GOD IS IN CONTROL


This book was published in January this year, and Major Rosemary Dawson has written a personal Review after reading it, which appeared in The Salvationist magazine, 11 May 2019:


'Some people seem to encounter more than their fair share of life's trials and tribulations. Janine Harrington is certainly one of them.

Describing herself as having 'a PhD in Life', for the past 30 years she has chosen, through her work as a Christian Counsellor and Abuse Consultant, to use her own roller-coaster experiences as a survivor of physical and sexual abuse to help children and adults come to terms with similar situations.

People who have suffered abuse often blame themselves, rather than the abuser. Janine seeks to explain that the only way to deal with such experiences is to work through them - to let them out in the open and share with others. 'Forgiveness isn't forgetting, it's about remembering ... and letting go', she says.

Now she invites Readers to share her personal journey, asking them what they might do in similar situations. She explores the age-old question: 'Why do bad things happen for no apparent reason?' - whether a betrayal of trust, a broken marriage or a life destroyed by the actions of another. She recounts how a ten-year period of daily domestic violence stripped her of self-esteem and left her frail, vulnerable, afraid and alone.

So, where does God fit into the picture? The answer, she says, may surprise you!

Throughout her struggles and ensuing health problems, there remained the seed of Christian faith, the heritage of her Christian upbringing. With courage and determination, this ultimately helped bring her back to 'a mindset where God is in control of my life' and gave her a renewed purpose for living. With God's help, she has found the inner peace that had deserted her, and can accept herself as the person she has become. Janine is now a Lay Preacher and an Adherent Member of Filey Salvation Army.

This inspirational and candid book, which contains some helpful and thought-provoking meditations, represents the positive outlook which comes through her present battle with Cancer: 'Out of every negative must come a positive - the greater the negative, the more than positive must be.'

My grateful thanks to Major Rosemary Dawson

'Always Believe - A Personal Journey of Faith' is available from Amazon, priced £7.99. 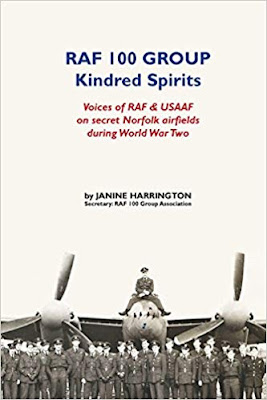 This book was the fulfillment of a promise to Veterans and their families who served in RAF 100 (Bomber Support) Group, under Bomber Command. It brings together the many airfields in Norfolk which became their home in wartime, and offers a voice to those brave yet humble heroes, willing to sacrifice their lives to bring the kind of peace we enjoy today. Next year, 2020, marks VE Day when people flooded into the streets, sharing their joy and happiness that finally war was at an end, yet knowing at the same time that life could never return to what it had been, with so many who had been killed and families mourning the loss of loved ones. This weighty volume shares stories of the few who lived to tell their tale, while I remain passionate about preserving both the history and stories of RAF 100 Group and those who served with them.

Joe May's Review is one of many from Readers who have read this book:

'This is clearly a labour of love by the Author. I couldn't put it down. The work of 100 Group RAF has never been widely known, but here are so many memories in one book. It may never be known how many lives they saved, but the RAF would have faced much higher losses without the 100 Group's talented crews and ingenious equipment addressing various ground-based and airborne Luftwaffe threats. Even 100 Group sadly lost aircraft and crews.

RAF 100 Group was a hyper-secret and superbly successful Unit in Bomber Command. Janine has produced a unique book about a unique Unit in the RAF during World War Two who were tasked with confusing as well as raiding against the Luftwaffe using electronic warfare - to confound and destroy. Although electronic warfare is common-place today, it was new at the time and 100 Group were its pioneers. Janine writes concisely and completely about each phase of the evolution 100 Group experienced as well as a comprehensive mention of equipment utilised (most books mention two or three when there were over a dozen). She has also assembled first-hand accounts from 100 Group members living today, as well as accounts from family members which provide insight and much required context to better understand the times.

In 'RAF 100 Group - Kindred Spirits' book, Janine has the Reader learning vital, though little known, details of electronic warfare's infancy as well as its tactics. Handfuls of aircraft flying distraction raids appearing on German Radar as hundreds, and aircraft forming an electromagnetic line over the Channel during the prelude to D-Day so that German Radar would be none the wiser, are just two examples for the Reader to be amazed by 100 Group's almost nightly exploits.

But why is there such a void, and who is the Author?

The void is grandfathered in for two primary reasons. The first is that the Group's activities were hyper-secret with its aircraft specially marked so that each was under continuous guard when not flying. Any Military Service person will identify with the stories of Special Operators whose aircraft landed at a diverted airfield. The second is due to the fact that Bomber Command personnel went from hero to zero at war's end. Thankfully, that gross error has been corrected, with Janine addressing the issue objectively as well as poignantly. To say that Janine can write about RAF 100 Group is a bit like saying the Queen has poise. Janine was born to her work with her mother's fiance Flt/Lt Vic Vinnell MIA (Missing in Action) over Europe's war-torn skies, never to be recovered while on a mission still held secret today. Since that time, she has served to record the Unit's history and Service Personnel recollections. She is also Secretary of the worldwide RAF 100 Group Association.

Aside from the plethora of gems found within Janine Harrington's writings, personal accounts and images regarding the war, there are certain treasures which stand out. One is the pilot's account of flying his Hawker Hunter beneath Tower Bridge and why (an incredible series of events). Another is the remembrance of walking seven miles to enjoy an egg (such was the need of fresh food as well as a bit of company). One other gem is the Chapter devoted to the USAAF's 36th Bomb Squadron Radar Counter Measure Unit (of the Mighty Eighth Air Force).

Absolutely get this book since it will substantially enhance a World War Two Library Collection as well as Aviation Electronic Warfare specialisation!

My grateful thanks to Joe May for sharing his thoughts and sentiments after reading my book.

Joe made mention, in his Review, about my mother's wartime fiance Vic Vinnell. Vic, with his Canadian friend and Pilot Jack Fisher, flew with 192 Squadron (lead Squadron of RAF 100 Group), based at RAF Foulsham, Norfolk. This year marks the 75th Anniversary of their deaths in Mosquito DK292. Still it is not known what happened on their final fateful flight during the night of 26/27 November 1944, but we can remember them ... we can ensure that they did not die in vain.

To this end, later this year, I am having re-published the first book I ever wrote about RAF 100 Group, entitled: 'On A Wing & A Prayer'. This will be dedicated to Vic and Jack, and to all who flew dangerous operations under the still very secret RAF 100 (Bomber Support) Group ... Guardian Angels of wartime skies!