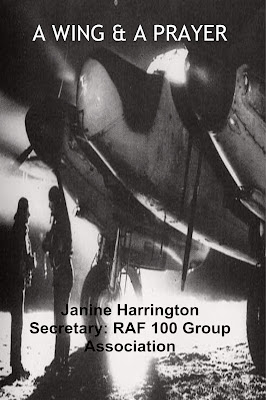 'My promise, Dearest Nina, is that one day I shall write a book about the most beautiful love story that ever was - our story, the story of Nina and Vic.'


Vic believed he had the rest of his life to fulfill his dream - to marry his wartime fiancee Nina and become an author. He yearned for peace and a family where love prevailed - something he had waited a lifetime to experience. Meanwhile, caught up in the Second World War, he had an active and dangerous role as Navigator/Special Operator in 192 Squadron, based at RAF Foulsham, Norfolk; lead Squadron of the very secret RAF 100 (Bomber Support) Group under Bomber Command. He regularly flew deep into the heart of Germany in Mosquito DK292, named 'N for Nina', involved in covert operations, including identifying and jamming enemy Radar, flying above the bombers as their Guardian Angels. His Canadian friend and Pilot Jack Fisher was to be Best Man at his wedding taking place at the end of the year during their next Leave.

It wasn't until the early 1980s that I shared my mother's wartime story. Together, we began fulfilling Vic's promise, and in doing so, re-ignited the flame of a wartime love, giving Mum an inner glow of warmth and hope which had lain dormant for too long. For the first time in 50 years, she spoke Vic's name aloud, reminded of his words: 'Love is Eternal'. This took nothing away from the love Mum shared with my father, who also served in the RAF. But it was a different love to that shared with Vic five years before. Theirs had been a love born in wartime, when every moment was precious, because every moment could be their last.

Together, we became founding members of what was to become the worldwide RAF 100 Group Association of which it remains my privilege and joy to be Secretary today, and Editor of our Association magazine: 'Confound & Destroy'. Mum and I wrote and talked to Vic and Jack's former friends and colleagues, as I continue to do today. Sadly, Mum never got to meet them in person before she died of Cancer a short while before our first Reunion. While for me, it remains a humbling and privileged experience to know these people and be part of this Family of Kindred Spirits.

Mum, Vic and Jack were my inspiration. I remain passionate about preserving the history of RAF 100 Group in which they were so proud to serve, and voices such as theirs with a story to share. Too many have taken their secrets to the grave, but I will continue to write, to share words they can no longer say, for as long as I am able. Living with Cancer as I am, I feel it is the most I can do for those who have become firm friends to ensure they never become 'forgotten heroes' ... but are remembered with Love.

In the 75th Anniversary Year of their death, this book is written as a Memorial to Vic and Jack. It tells their fascinating and powerfully emotive story, with a Foreword written by their best friend Phil James MBE with whom I continue to share a close bond, as I have for over twenty years.