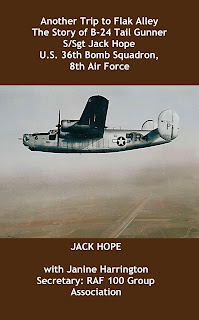 ANOTHER TRIP TO FLAK ALLEY

It gives me tremendous pride and pleasure to finally show the culmination of many months of hard work in bringing together the writings of Jack Hope ... a valued friend, who I have known for fifteen years and more, fulfilling his dream to become an Author.

Jack Hope is an extraordinary man - a pioneer of his day. This very personal account follows the journey of his life, inviting readers to experience the pleasure and pain from the moment of his birth to present day.

Born in Kelly Army Airfield amidst the constant sound of aircraft, he wondered in later years if that might account for his lifetime affinity with flying. However, he first had to pass a tortuous initiation period for survival as, in childhood, he worked diligently alongside his family, in a time dominated by The Depression in America, leading a nomadic existence. They worked on farms, in fields, on ranches, during times so desperate their family became fragmented, scattered throughout the State, in various degrees of despair.

With the onset of war, Jack and his two brothers initially joined the Army, serving in the Cavalry Division, before finding his true Calling as a Tail Gunner in Lt Brookshire's crew, serving under the U.S 8th Air Force's 36th Bomb Squadron, RCM (Radar Counter Measures).

It was this Squadron which came across to the UK during the Second World War, to fly in partnership with RAF 100 Group, living and working alongside them, based on airfields in Norfolk. The direct descendant of this American Squadron exists today as the U.S. 36th Electronic Warfare Squadron, commanded by Lt Col Tom Moore ... and the exciting news is that they are coming to join us at this year's RAF 100 Group Association Reunion in May in Norfolk to commemorate those who didn't return home after war ... the GIs are coming to town! Our Reunion this year therefore creates a precedence. Not only will it be our 20th Reunion since the Association began, but also an historic occasion as the two Groups come together for the first time since the end of the war. 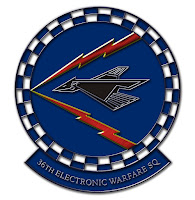 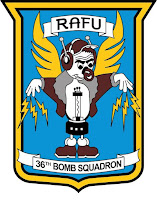 During WWII, the U.S. 36th Bomb Squadron of which Jack Hope was a part under the 8th Air Force; was secretly disguised as a Bomb Squadron, displaying the RAFU Gremlin insignia, seen left. Today, the 36th Electronic Warfare Squadron (36EW), as its descendant, with insignia shown right; is involved in operational testing and reprogramming of all Electronic Warfare systems in the Combat Air Forces.

The Squadron continues to carry out the World War Two Squadron's mission, that being to deny, deceive and defeat electronically, enemies of the liberty-loving people of the United States, Great Britain, and its Allies.

Jack Hope was proud to serve under the 36th, despite the dangerous work in which he was involved, shared openly in his book. As a true Wordsmith, with a wonderful gift for sharing a good story, he has the skill of making all his life experiences come alive, painting vivid, raw, often painful pictures in the mind of the reader. His book is a patchwork of lively and breathtaking adventures which shaped his life. It offers maps, diagrams and photographs of the day, so that people might remember and honour those who flew with him, but did not return.

The book represents a legacy which will live on, long after my dear friend Jack, together with all those who flew with him are gone. 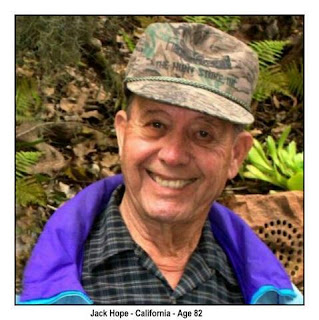 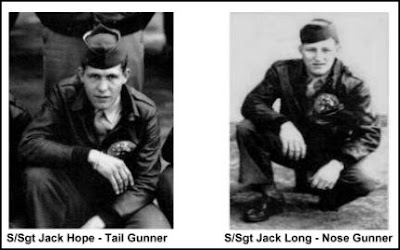 
Lt. Brookshire told the crew to ‘hold on’ because we were going to take an exciting ride towards the ground. With those words spoken, he started a tight spiral directly down into the hole. A ‘spiral’ in aircraft terminology is a maneuver that allows for a rapid descent without an excessive build-up of air speed. It has a practical application in providing the ability to rapidly lose altitude while remaining over a selected spot in preparation for landing, especially for emergency or forced landings. Student training manuals warn that:

‘… sufficient altitude must be obtained before starting this maneuver so that the spiral may be continued through a series of at least three 360° turns’.

I suspect, in his wildest imaginations, the Instructor who wrote that could not visualize a four-engine bomber starting a spiral at 16,000 feet, with recovery under 1,500 feet!

The words came with the action. We did just that! I can certainly vouch for the fact that it proved an exciting and exhilarating ride. At what I would guess was about one half of the way down, Jack Long, my lifelong friend and Nose Gunner; called Lt. Brookshire to tell him he was having painful ear problems. Lt. Brookshire responded:

“Roger, I'll break off and we will climb back through the soup to the top.”

“Roger. Tell me if you change your mind.”

Continue, we did, and before I could believe it, we broke out into clear air not far from the ground and very close to our Base.

“Hillside Three, this is Victor E-Easy – Over.”

“We are in the clear at one thousand – landing instructions, Over.”

“Roger, E-Easy. There is no traffic. Wind light and variable. You are cleared to land – Number one, runaway two six. Give me a call turning final.”

Land we did … and it certainly was so good to be Home!!

Thanks Jack, for sharing your journeyings. It was a privilege and an honour to bring together your writings shared over the many years we have been firm friends.


'Another Trip to Flak Alley' will shortly be available on Amazon to purchase. However, newly published, it can currently be bought from the main FeedARead website: FeedARead.com.