With the launch of a new novel, it was my pleasure to be asked to take part in an Exhibition being held at Ga11ery 11 local to where we live. It offered the chance of old and new artistes to display their wares ... including arts and crafts, paintings ... and my books.

With my 21st publication, it felt like a Coming of Age Party!

Bottles of wine flowed followed by dishes of tasty nibbles as the public gathered to talk and share what was on show, despite the howling wind and rainfall putting off all but those determined to enjoy their evening.

My display featured the RAF 100 Group Association, remembering those brave forgotten heroes whose name is never mentioned on Remembrance Day because of the secrecy of their work. Shame then that the book I had hoped to be able to show on this day in their memory was pulled suddenly by the publishers, despite having a contract between us. RAF 100 Group - Kindred Spirits, draws together the voices of both RAF & USAAF who flew in partnership on secret airfields in Norfolk, UK. It is a precious and very unique book which illustrates commitment and courage of ordinary men and women living in extraordinary times.

As a complete work, it is written in their words, including private writings, poetry, photographs and information about secret operations, flying like Guardian Angels over the bombers, identifying and jamming enemy radar. This was their main field of work, and yet they did so much work, including working with the Resistance, S.O.E and S.O.D, confusing the enemy by countermanding orders in German, etc, etc. The book is filled with so many personal experiences shared openly for the first time. It is a book which has come to mean so much to so many.

As Secretary of the worldwide RAF 100 Group Association, and having worked alongside them for the past twenty years or so, my promise to them was to bring their stories out of the shadows into the light, to give them a public platform and a voice with which to share their fascinating stories. Those who did not come home will remain forever young, like my mother's wartime fiance who served under the lead Squadron of RAF 100 Group - No. 192, at RAF Foulsham, Norfolk. Vic and Jack went off in their Mosquito DK292 and were never heard from again. It is thought they were on an operation over Munich, and on their return perhaps had engine trouble, forcing them to land on a French beach, which they didn't know was mined!! The story of my mother Nina and Vic, who were to have married a few days following this operation, was published on the 60th Anniversary of Vic and Jack's death in November 2004. While this year marks the 70th Anniversary. And it was just so important to have this book published this year, 2014, bringing them together as part of the RAF 100 Group with which they served ... showing the wider picture, offering a deeper understanding of their very secret world.

Those who survived have held secrets about their wartime years throughout their lives, never speaking of what they were involved in, not even with their wives and family, taking the Official Secrets Act they had to sign at the time very seriously.

By withdrawing publication of this book, the publishers betrayed their trust and mine.

It was meant to be out for Remembrance Day, a fitting Memorial, which served to mark so many Anniversaries.

It is a book which means so much to so many, and now my pledge to these veterans is to continue my quest to get this book published ... whatever it takes ... sooner rather than later because for many, time is running out! Meanwhile, I have an ever-growing waiting list of people across the world made up of veterans and their families and friends, bookshops and Museums waiting to purchase a copy of this unique book.

I remain passionate that this book WILL be published. These precious, brave, and very wonderful people who helped bring the war to an early conclusion and saved so many thousands of lives WILL be recognised, and have the respect and honour they so richly deserve. 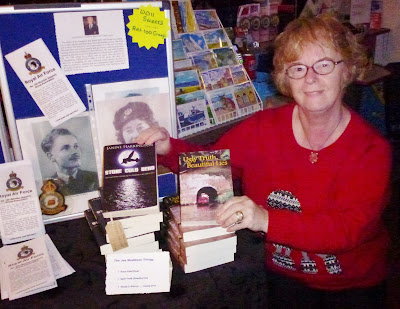 Meanwhile, the exhibition offered a platform for the second of my two mystery novels entitled: 'Ugly Truth, Beautiful Lies', featuring Joe Maddison who has become adept at uncovering historical puzzles. The first in the series came out last year, published by Austin Macauley: 'Stone Cold Dead'. Both have an underlying thread linking them into a third in the series still to be published set in WWII.

I remain passionate about writing, but grow wearisome of publishers for whom books remain a business. I understand they need to make their profit margins, etc. And yet it is people who matter, people who become the readers, people who are curious and want to be informed, otherwise why do I continue to receive so many letters from those wanting to know how to find out about family members who served in this secret Group?

In this year, when the world has been remembering Anniversaries relating to two World Wars, I would have thought it fitting that a book be published to celebrate the lives of forgotten heroes, who served in different RAF Squadrons under a very secret Group involved in electronic warfare in the Second World War about which so little is written or known, particularly from the perspective of those who were there at the time.

'We WILL remember them!'