SLIPPING THROUGH A PORTAL ...

Imagine for a moment ...


It is night. You are staring up at the skies, seeking out the stars set on a black velvet cushion, needing to hold, for a moment, thoughts of a daydream, wishing it were true, aching for the promise of hope that might bring.


Dark shadows flit across the heavens. Light dims. Stars glitter and fade. Suddenly, the roar of Merlin engines can be heard, getting ever nearer. Sirens raise an endless tuneless motion of sound breaking wide open the silence, while the sound of running feet pound the pavement ... children wail, afraid of the unknown ... adults startled like rabbits are caught in a frenzy, dragging loved ones close.

When did it begin?

Where will it end?

And then ... years rush by. The tunnel of Time whisks me back to the present. I open my eyes. It is evening, yes. Outside the last call of the gulls are crying like tiny babies seeking out their mothers. But there is light. And all around us are people talking and laughing, pausing for moments to gaze at our unexpected display, asking questions, wanting to know what it's like when such a night as this is in wartime ... and freedom is but a dream away ... 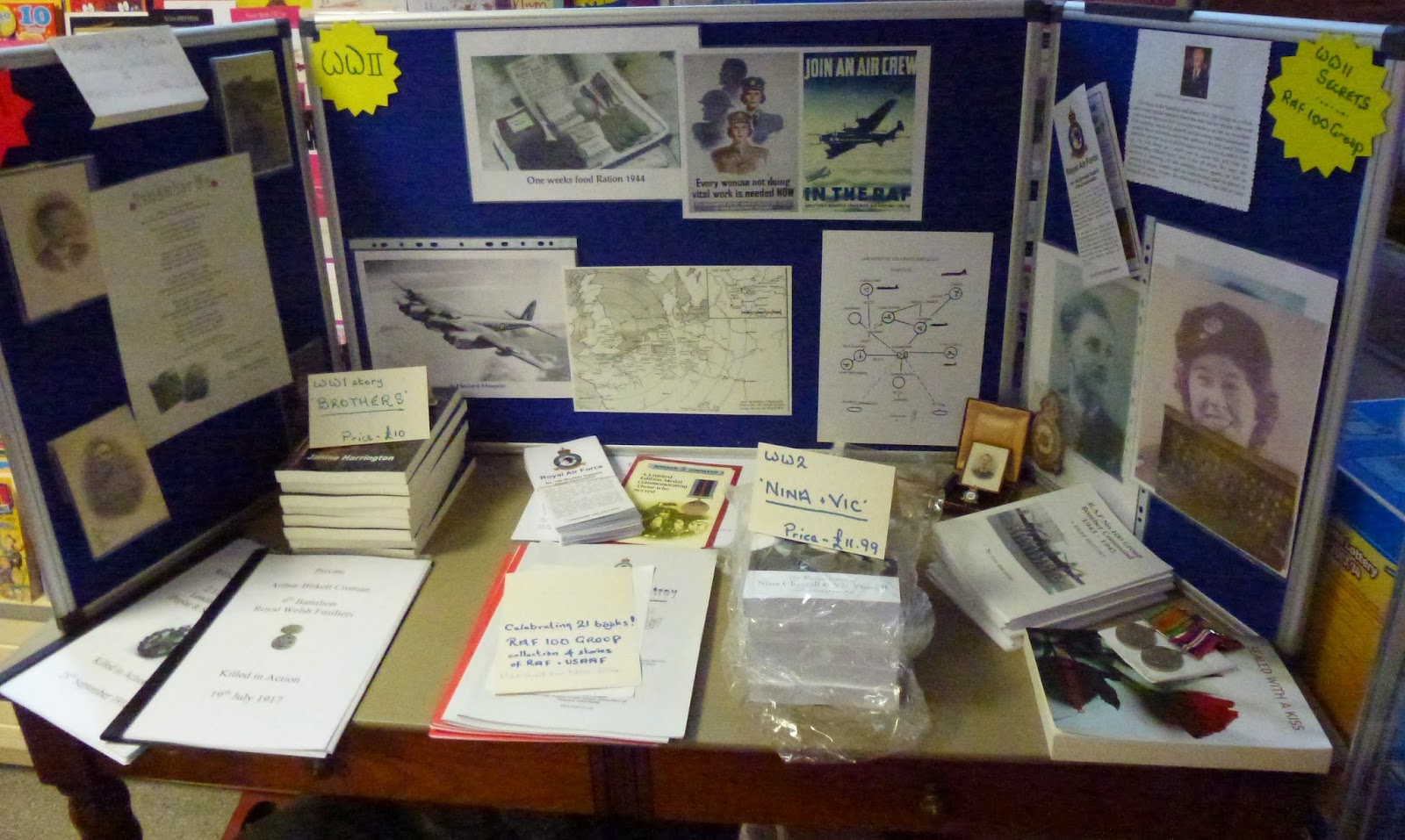 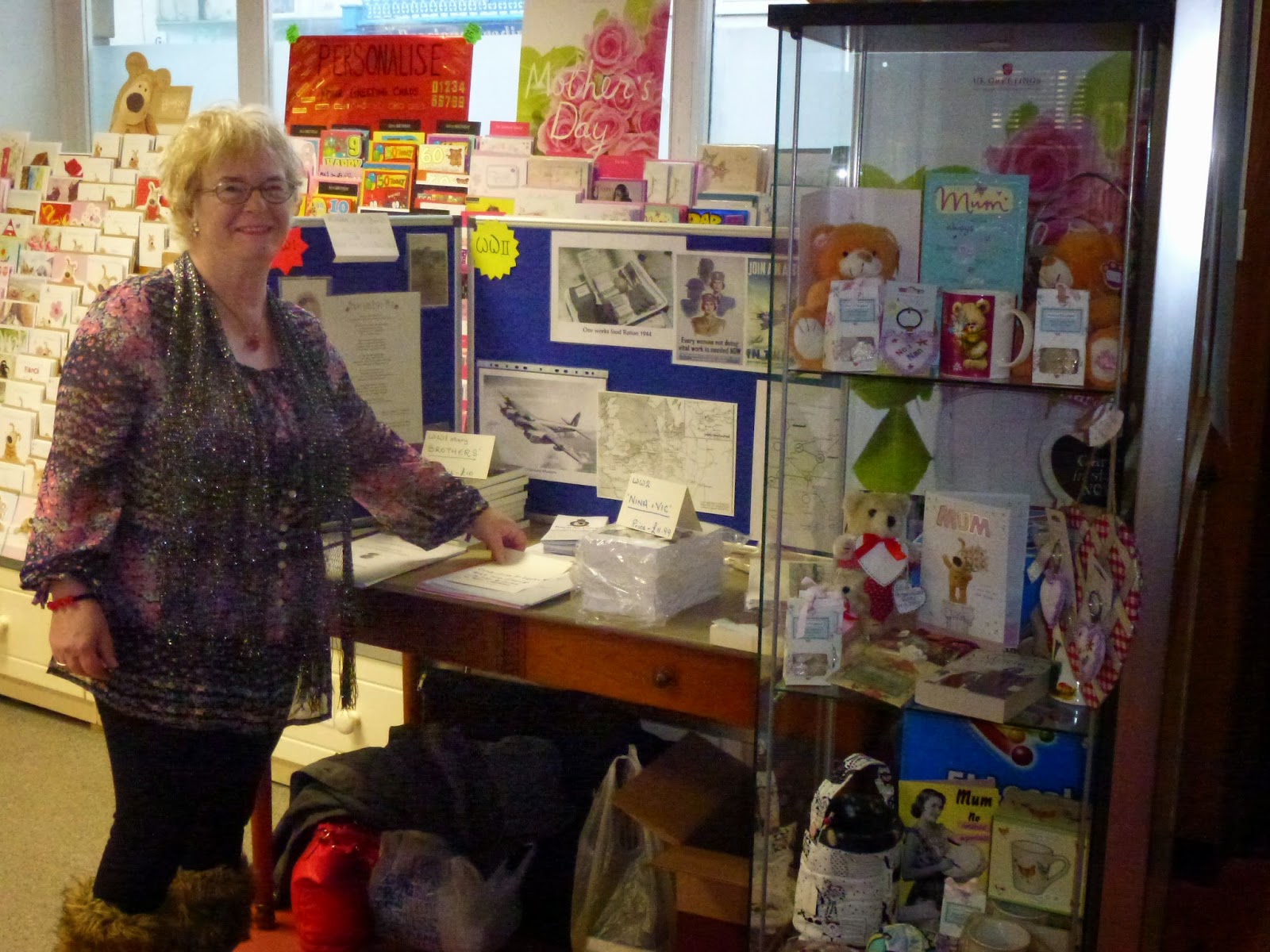 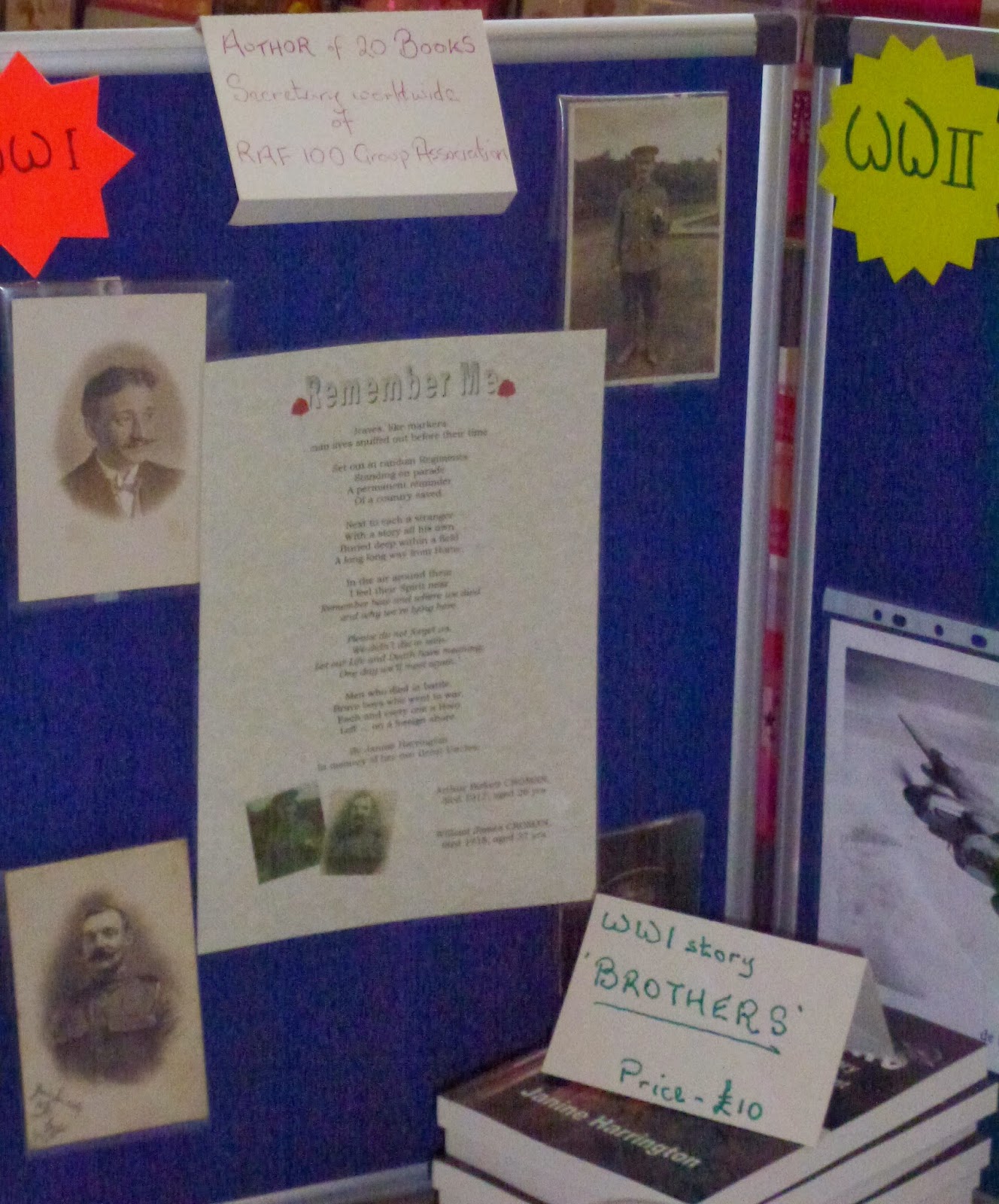 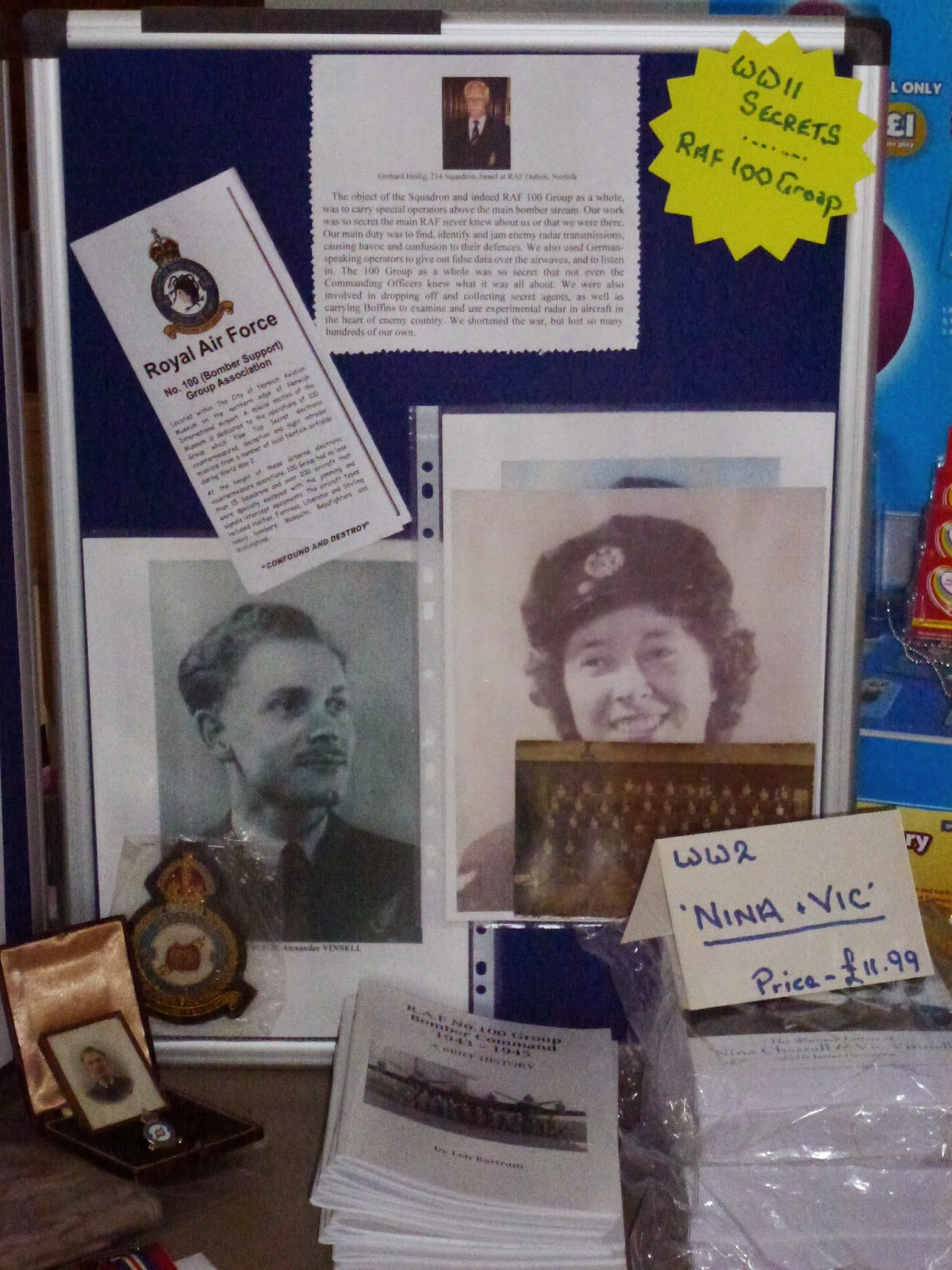 GA11ERY ELEVEN within Filey Post Office, North Yorkshire; hosted an Art Evening on Friday evening, 28th March. Tony and I displayed books, memorabilia and posters together with other items of interest relating to WWI with my book 'Brothers', the wartime experiences of my two great uncles; 'Nina & Vic: A World War II Love Story' about my mother's wartime love, featuring Navigator and Special Operator Vic Vinnell with Pilot Jack Fisher of RAF 100 Group; and 'Stone Cold Dead', my first published thriller, with a mystery set in wartime.
The Gallery is hosting another evening in the Autumn when it is hoped I will have two new publications on display ...
I would like to thank Fiona and Ben for all the nibbles and drink that went with the evening, and the many people who turned up despite the weather. It was good to have the books on display, and to meet others in the 'art' world ... and a good time was had by all!

Posted by Janine Harrington at 08:17 No comments:
Email ThisBlogThis!Share to TwitterShare to FacebookShare to Pinterest


When opportunity comes knocking at the door, who are we to say 'Hang on, I'm busy right now, come back later!' or 'It isn't quite the right time ...' This opportunity might not come again, and we need to seize the chance when we can, grab hold of everything this life has to offer ... and go with the flow, willing to see where it might take us.


This is certainly the case for me right now. Doors are popping open right, left and centre, until I get dizzy just thinking about it. But then, I need to 'Do' not 'Think', and bring my scattered emotions together to use in the writing to come.


The year had hardly begun and me still getting used to being a married woman, while still using my maiden name for writing; when out of the blue, I'm asked for an interview by 'Living North' magazine following up the publication of my first thriller: 'STONE COLD DEAD' by Austin Macauley in October last year.
I have my second Joe Maddison thriller steeped in myths and legend, with plenty of clues for the hero to uncover truths buried in time - UGLY TRUTH, BEAUTIFUL LIES - coming out shortly.

Meanwhile, as Secretary of the worldwide RAF 100 Group Association made up of veterans of WWII who were part of secret counter-measure operations committed to keeping Britain safe, I continue to feel humbled and privileged to serve these wonderful people in whatever way I can. Nothing gives me more joy than to receive the many letters, photographs, shared experiences, and daily emails they continue to send to me, each one an absolute treasure ... choosing that special moment to savour everything it has to offer.

These are people now in their late eighties and nineties, and yet their memories remain crystal clear of those bygone days when they came together like a Family, to push the enemy back to distant shores. I hear also from their loved ones and family who, once they pass on, have no idea what to do with the material they find in attics crammed with cardboard boxes filled with Log Books, Flight Sheets, official documents and papers, writings, poems about which the family know nothing at all. Suddenly, they have so many questions. And the more they learn, the more they need to know. It becomes a quest for the future ... and in turn, they join our Association to meet with those their loved one might have served with and who can share that part of them they never ever knew.

As Editor of the Association magazine, more and more it becomes obvious that there will never be space to share this priceless material. And yet I remain passionate that it should not be relegated to decaying boxes in the attic where it risks being lost forever, together with the names of these already forgotten heroes. The name of RAF No.100 (Bomber Support) Group is still not known today, 70 years on. And yet it was these very people who helped shorten the war to keep our country safe, losing so many of their own. We meet each year in May in Norfolk where they were based on secret airfields and emotions run high as they come together once more with those they knew like brothers. It is a time for quiet reflection, for remembering those who gave their lives in service to their country, and offers the opportunity to talk openly amongst those who shared the experience, knowing what it was to fly high above the clouds, alert, fearful, without warning being attacked by the enemy, seeing best friends perish ...

I remain determined that these people and their memories will be remembered long after they are gone. And to this end, I brought together material collected by a schoolboy at the time, Len Bartram, who cycled around his home area, watching and learning, talking to airmen and writing notes, drawing maps, leading him in adult years to become a speaker; to create a series of 12 booklets. Each centres on one of these airfields, with the Squadrons that came and went, the aircraft, and the people for whom it became Home.

These booklets provided a taster.

Now I am bringing them together under one cover for the future, together with so much more information recently come to light, including people's shared experiences who have been inspired at the thought of being published in a book ... somewhere finally to safely lay their memories to rest, and where people for the future might learn from them.

will be published by Red Kite in time for Remembrance Day 2014, a year which marks the 70th Anniversary of the death of my own mother's wartime fiance Vic Vinnell, and his Canadian friend and pilot Jack Fisher. They served at Foulsham, Norfolk, in 192, the lead Squadron of 100 Group during the war, and on whose information other Squadrons acted. On the 60th Anniversary in 2004, I had published 'Nina & Vic: A World War II Love Story'. That book focused on the love shared between a WAAF (Nina, my mother) and Vic, her sweetheart, an RAF Officer in 100 Group. This book I am writing now, focuses on the history and work of RAF 100 Group and the shared experiences of those who served, together with the USAAF who flew in partnership with them on so many wartime operations.

This book is set to become an aviation collectable.

Within its pages will be the original signatures of veterans who served under this very secret Group.

The first 100 publications will become the collectables, with those that follow still holding so much new and vital information for all aviation enthusiasts ... and yet, at the same time, written in a language understood by all, aimed at readers with no previous aviation knowledge, and absolutely priceless in terms of emotive personal writings of what it was to serve in this very secret Group.

Needless to say, it presents a huge challenge to the author. I have likened it to climbing the Himalayas in that there are so many peaks and troughs, so much material coming at me from all parts of the world. More than anything else, I want to do right by these brave forgotten heroes who deserve so much respect, admiration and gratitude for what they achieved, and who never received a medal from Bomber Command under which their Group served. Not even on Remembrance Day do you hear their name mentioned. It remains a travesty of justice. These are such wonderful, giving, loving patient and caring people ... the best in the world. Many of them are legends of their time. I count them amongst my closest Family. They will always have a place in my heart. And yet so little is known about their experiences. It is as if they were simply airbrushed out of history. Which is the reason I remain committed to bringing this material together ... dedicated to them and the memory of those who did not return ... like my mother's fiance Vic Vinnell, and Canadian pilot Jack Fisher. 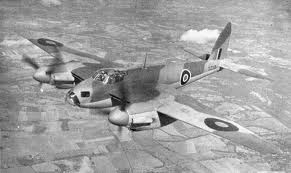