Today marks the 20th Anniversary of the death of a remarkable and much loved lady ... my Mum.

I miss her today so much as a valued part of my life. To me, she was more than a mother. I knew her as a Playmate, my Best Friend, a Woman, a Visionary, my Soulmate. As a child, she widened the boundaries of my world, injecting a powerful concoction of dreams and imagination whereby ordinary objects became something very wonderful and magical, leading me to write stories from an early age. In later years, we talked and shared about anything and everything. We'd swap clothes, go on holidays together or have weekends away. They are times I treasure today as I remember. It is from her I drew my inspiration and my strength, as well as a firm faith in God. We spent her final ten years writing a book about her wartime fiance, made up of her diaries as a young girl, and letters shared between herself and Special Operator Flt/Lt Henry Victor Vinnell, known as Vic, before his untimely death on 27 November 1944 alongside the man who was to have been Best Man at their wedding a short while on, Canadian Pilot Flt/Lt Jack Fisher. They were flying their usual aircraft Mosquito DK292, affectionately known as 'N for Nina'. There is still a mystery surrounding their death and the operation they were on at the time. Both in their early twenties, they served at RAF Foulsham in 192 Squadron, RAF 100 (Bomber Support) Group, Bomber Command - a secret Group of Squadrons based on airfields in Norfolk, UK. Their prime task was to identify and jam enemy Radar; but they also worked with the Resistance, Bletchley Park, SOE and SOD, picking up and dropping agents into enemy-occupied territory. It is Mum's wartime story which led us to become founding members of the RAF 100 Group Association of which today I am proud and privileged to be worldwide Secretary, for the past twenty-five years working with veterans and their families. 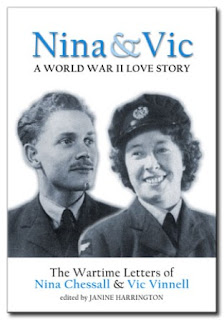 Anyone wishing to read my mother's wartime experiences and learn more about the special love shared between Nina and Vic can obtain a signed copy on receipt of £12.00 + pp. I now only have a certain number of copies left of the original publication as I am in the process of having their story re-published under a different publisher for the future, with additional information.

Both Nina and Vic will continue to be remembered as their names are spoken during our annual RAF 100 Group Reunions in Norfolk alongside that of Canadian Pilot Jack Fisher, Vic's friend and Pilot who was to be Best Man at their wedding a few days on. They remain part of a worldwide Association of kindred spirits which continues to grow as younger generations join, with members in daily contact. Mum would have loved the very real connection we enjoy with one another.

What actually gave rise to this writing today, written in memory of Mum, is that completely out of the blue, when at a particularly low ebb on 19 July, the day on which, last year, I read my now ex-husband Tony's email telling me he had another life in London and would never be coming home; a miracle occurred. Someone was reading my blog, in particular the piece I wrote about my two great uncles, Will and Arthur, brothers killed in WWI. She felt compelled to write to me, and in doing so, opened an unexpected door into the past. She is the daughter of my maternal grandmother's youngest sister. For the next few hours it was an absolute delight to follow in the footsteps of those who had gone before, sharing stories of a past age. She completely turned my day around, chasing the shadows away, and we continue to correspond several times a day.


Posted by Janine Harrington at 10:03
Email ThisBlogThis!Share to TwitterShare to FacebookShare to Pinterest