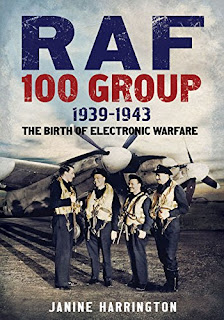 FREE Delivery in the UK.
This title has not yet been released.
You may pre-order it now and it will be delivered to you when it arrives.
Dispatched from and sold by Amazon.
Gift-wrap available.

First book in a series of three about RAF 100 Group, starting on 3rd September 1939 as families gathered around their wireless sets to listen to the horrifying news that Britain was at war.

Air battles over Germany were becoming intense and complex by the Autumn/Winter of 1942. There was deep concern about the escalating losses of RAF night bombers and the ever increasing effectiveness of the German air defence system. Something drastic was called for, and this came in the concept of establishing a specialist RAF unit to become responsible for the operational development, application and co-ordination of all RCM (Radar Countermeasure) programmes, from the air and from the ground. Bomber Command suggested the role for what became No.100 Group in June 1943, to include specialist RCM aircraft from the 8th USAAF. The Group was officially inaugurated on 8 November 1943. Its first operation was in December 1943.
Wartime operations under RAF No.100 (Bomber Support) Group were highly secret. Not even the RAF or main bomber forces which they protected knew of their existence. The principal tasks for No.100 Group were: to provide direct support to the RAF bomber offensive by using RCM, Window and night intruder operations with Mosquitoes; to exploit enemy air and ground RCM; to investigate the development of enemy radar and radio equipment by airborne signals intercept, done by lead Squadron No. 192; to build a body of knowledge as a basis for planning future operations; and to make use of immediate information about enemy fighter movements. Also vital were RAF Y-Service - the progressive analysis and interpretation of German Air Force radio traffic and Bletchley Park Air Section - the Intelligence output from the Air Section at Bletchley Park supplying Bomber Command with knowledge of enemy night fighter intentions and their execution.
At the end of the war, Bomber Command held the view that No.100 Group's operations had saved at least 1,000 bomber aircraft and their aircrews had brought the war to an early conclusion. However, those who served under RAF 100 Group received no medal, and even to the present day, is not recognised for the work they achieved.

As Secretary of RAF 100 Group Association today, this book is written as the first in a series to honour these brave young men, too many of whom gave their lives for their country in the name of freedom. I remain passionate about preserving both the history of this Group and the wartime experiences of those who served under it on secret airfields in Norfolk.

We WILL remember them!


I have also just signed a contract with Austin Macauley publishers who will be bringing out a unique and very special book long awaited by veterans and their families around the world which shares, in their own words, personal stories of what it was like serving under this very secret RAF 100 (Bomber Support) Group during World War Two. It is the first time ever, for many veterans, to have shared their experiences. The Group was so secret that, once having signed the Official Secrets Act, they didn't even tell their wives/girlfriends or families what they were really doing and involved in. Too many have already taken their secrets to the grave. This book therefore represents a valued collection of poems and stories, giving veterans a voice.
This book is complete, and I remain hopeful of it coming out this year.

Watch this space for further details.

Posted by Janine Harrington at 09:10
Email ThisBlogThis!Share to TwitterShare to FacebookShare to Pinterest