HOME IS WHERE THE HURT IS: Surving Sexual Abuse

Published in 1989 by Thorsons (now HarperCollins)


This is the second book commissioned by Thorsons and ends the series of books on abuse written in the name of Janine Turner.

Through previous years I had had therapy with one of the top psychologists in the country, coming to terms with an abusive past, trying to understand it, and this book is dedicated to him. He helped write it. Together we uncovered the demons and put the beasties to rest.

My first book about abuse was written using memories and diarised events as far as I remembered. Through therapy, looking back and re-experiencing the trauma as an adult instead of a child, it was like a film unfolding, with the very first scenes of abuse coming out last.

In childhood, I was sexually abused by a specialist at the hospital treating me for a 'club' foot. In teenagedom, I was sexually abused by a music teacher, and this remains an ongoing case with the police, waiting for other victims to come forward. I was raped at 16 years old and became a battered girlfriend ... battered wife ... by then it was all I believed I was worth. Ten years on, I entered what I believed to be my happy ever after, and had the beautiful baby girl I was told I could never have due to internal injuries from abuse. Ten years further on, I knew that mental and emotional abuse is so much worse than physical and again I was fighting to break free.

This book uses personal experience, my own and others, as a way of offering an understanding to those who want to support, to listen, to care for those who are hurting today. It includes a directory of agencies both in this country and abroad, given that I was, at the time of publication, working with a number of different countries including Malta where I went on to live with my daughter for a while. It also has pointers of self-help, things which helped me and in turn might help others, and I have included some early art work to use where there are no words to describe what is going on inside. Finally it gives a voice to abusers in the belief that, in order to understand the problem as a whole, we have to target the problem at source. Who are they? Why do they do the things they do? How do they feel? Why can't they see the pain they cause? What is the key to unlock their sensitive side? Is there a way of living together or does it always mean separation and breaking apart?

I worked with men in prison. I worked with paedophiles in a maximum security prison. I discovered answers that may surprise you. Only by listening and understanding can we ever have the chance to move forward and find the kind of answers we need to create more effective child protection programmes for the future. 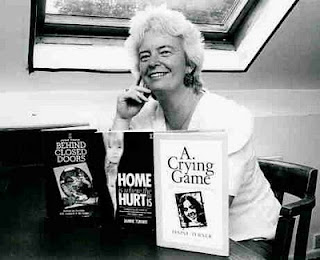 Posted by Janine Harrington at 07:43
Email ThisBlogThis!Share to TwitterShare to FacebookShare to Pinterest