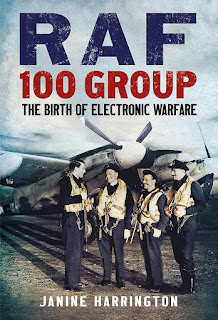 
During the Second World War, the threat of a German invasion of Britain was very real. The Royal Navy was at full strength in the belief that, as an island, the enemy would come from across the English Channel. The Army went to full conscription to boost its strength. However, following the Battle of Britain, the Government realised the folly of the R.A.F. bomber force using obsolescent aircraft and equipment as the skies over Britain brought waves of enemy bombers making determined attacks on major towns and cities causing mayhem, leaving a trail of devastation and grief in their wake.

It was following the Battle of Britain that the Air Ministry knew they desperately needed something visionary, something which hadn't been tried before if they were to stop the increasing bombing, and ultimately an invasion of Britain. Aircraft and crews were suffering heavy losses against flak and night fighters such as the Bf 100 and Ju 88. Hundreds of men were being killed. Hence, as early as the end of 1942, serious discussions began to take place behind closed doors seeking a new path to victory.

Authorised on 11 November 1943, by working together with the Air Ministry, Bletchley Park and the Y-Service, this specialist group of Squadrons came together, based on airfields in Norfolk. It was uniquely responsible for the operational development and application of all Radar and Radio countermeasure programmes; using specialised newly-developed equipment. Using new methods of warfare, the Group was able to successfully disrupt the enemy and turn the tide of the war, flying day and night operations, including the sinking of the Tirpitz and the bombing of Dresden. Using a range of unique and secretive tactics and equipment, men within the Group were able to 'confound and destroy' the enemy - perfectly living up to their motto.

R.A.F. 100 Group: The Birth of Electronic Warfare provides an analysis of many of these countermeasure devices and tactics - including Chaff, Airborne Cigar, Jostle, etc - alongside a history of the highly secret 100 Group and how it helped to herald a new era of airborne and electronic warfare.

This book also illustrates the strong partnership between the R.A.F. and U.S.A.A.F. using de-classified material.  The U.S. Eighth Air Force's 36th Bomb Squadron (RCM) arrived in Britain, living and working alongside R.A.F. 100 Group, flying in partnership with them. Together they forged a formidable force, standing united against an enemy which planned to rule the world as it gradually invaded countries, clearing a path towards Britain and anyone or anything that stood in its way.

The book offers an evocative and deeply moving account of the birth of electronic warfare against the German Defence Network using the kind of language everyone can understand.


Also available through Amazon and all high street bookshops.

Posted by Janine Harrington at 04:14
Email ThisBlogThis!Share to TwitterShare to FacebookShare to Pinterest